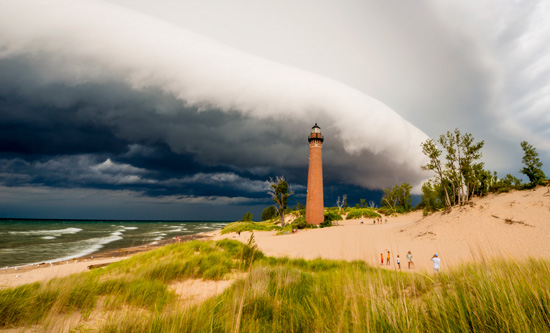 Because of health concerns relating to the Covid-19 virus, the lighthouse will not be open for tours in 2020.

Lighthouse Accessibility -- New to the park is a ten foot wide paved pathway that leads from the parking lot to the lighthouse. This now allows those with physical disabilities and those in wheelchairs to access the base of the lighthouse. 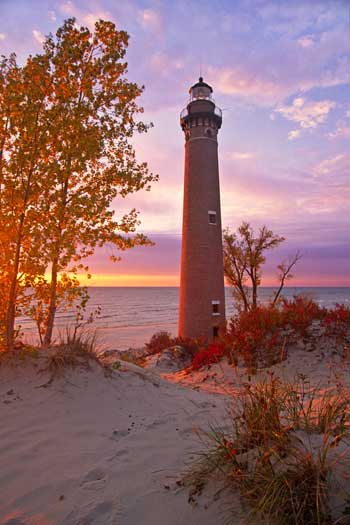 Photos by ToddAndBradReed.com
The Sable Points Lighthouse Keepers Association maintains the lighthouse, and it is open for tours daily from 10am-5pm late May through late September.

There is a $5 donation fee to climb the lighthouse tower; $2 for children 12 & under.

Due to weather conditions and staffing, it may be wise to call ahead at (231) 845-7417, or visit www.splka.org for more information. 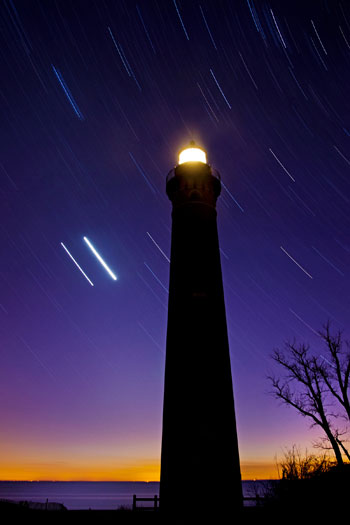 The early 1900s saw some changes to the lighthouse. In 1900 the tower was painted white, and an access road and storage building were added in 1902. The name was changed in 1910 to Little Sable Point Lighthouse, meaning "little point of sand," representing its location which juts into Lake Michigan. In 1977, the tower paint was removed and the original brick exposed.

Over the years, the lighthouse has had 15 keepers; and for one month, a woman took over when the original keeper took a temporary leave. The Sable Point Lighthouse Keepers Association took over the maintenance of the lighthouse in 2005, and it is open to the public from late May to late September.

Located on Little Sable Point (Lake Michigan) in Silver Lake State Park, near Mears, Michigan. Go to the end of Silver Lake Road look for the lighthouse parking lot. This is an excellent swimming beach and Lake Michigan produces some great sunsets. The parking lot has close to 200 spaces but during nice weather will most likely be filled by beach users.

The Little Sable Point Lighthouse is part of a Michigan State Park, and an entrance fee is required. Part of the fee helps preserve the lighthouse.


Take US-31 to the Hart exit, take Polk Road, west to 56th, south on Fox, west to 34th, south to the Silver Lake Sand Dunes, through Silver Lake past the State Park, then follow signs to the lighthouse.

Grand Traverse Light Station -- Located on the tip of the Leelanau Peninsula in Northern Michigan, The Grand Traverse Light was established in 1852.
Point Betsie Light Station -- Nestled in a dune just south of Sleeping Bear Dunes National Lakeshore, the tower stands 39 feet tall, but with the height of the dune it towers 52 feet above Lake Michigan.

Manitowoc North Breakwater - Walk out to the end of the pier to this Manitowoc lighthouse, and wave to the carferry S.S. Badger as the ship passes by.
Algoma North Pierhead - This lighthouse can be seen all along the Crescent Beach Boardwalk and is accessible via the pier if you want to venture closer.
Kewaunee Pierhead Lighthouse - Located in Kewaunee, Wisconsin...halfway between Sturgeon Bay and Manitowoc along Lake Michigan.